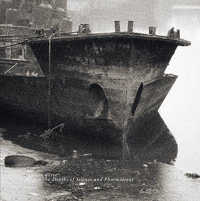 RAISON D'ETRE
"WITHIN THE DEPTHS OF SILENCE AND PHORMATION" (2LP (LTD. ED.))