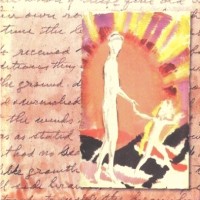 CURRENT 93
"OF RUINE OR SOME BLAZING STARRE (RE-RELEASE)" (CD)