For the 10th time, Whispers In The Shadow step out of the shadows into the public eye with a new studio album.
Even in the chaos year of 2020, the Viennese band is not slowing down but instead walking the path they’ve always walked. Their answer is the same as for all crises of the last 24 years of the band's existence: good music and a good sense of humour. Standstill and repetitions are foreign words in the ever- evolving band cosmos. With the inclusion of a 12-string acoustic guitar, a new dark folk sound mixes with the classic Whispers Goth Rock tunes, held together by the unmistakable voice of singer Ashley Dayour (Devil & the Universe).
Forever 1985, a powerful rock anthem in ‘classic’ Whispers-style opens the album, but the five-piece band proves that they are not afraid to face a three-minute pop number or much darker atmospheres, like on ‘The Futurist’, that turns into a cosy, dystopian nightmare.
"Yesterday Is Forever" is full of surprises, a black kaleidoscope that chases bright flashes across the retina as one listens. Each song an independent planet, together they make up a larger universe in which the catchy melodies don't let go so quickly. Despite all the diversity, there is never any doubt as to which band this is, not only because of the singing and voice, but also thanks to the detailed, transparent and powerful production by Ashley Dayour and Martin Gutmann aka mash Productions.
When it comes to the lyrical aspects of the album, this time Ashley Dayour has not submitted to any overarching concept, but has given his unconsciousness more freedom in the form of chain of thoughts and associations. The result are succinct lyrics, some of which follow the path of the previous album ‘The Urgenty of Now.’ 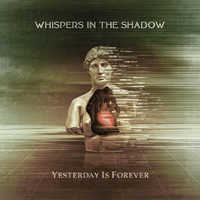 WHISPERS IN THE SHADOW