(ltd. ed. 400) After having been announced for the first time ages ago (to suddenly disappear from schedule …), we are happy to announce, that the much rumoured about ‘Get the Balance Right!’ EP is finally confirmed and will reach us in late August!
Marsheaux [re-] recorded "Get the Balance Right" exclusively for their Hansa Studios appearance last month (21 June 2017) [in occasion of the official Depeche Mode warm-up party for Depeche Mode’s Berlin Show] in the legendary studios and was offered at the merchandise stall at their live performance in a special ‘Souvenir Tour’ project.
Due to public demand, and with ‘just’ 2 years of delay to originally announced release date, the EP is now unleashed to a wider public – although still remaining very limited! The EP contains two versions of Depeche Mode’s 1983 single, including the instrumental B-Side ‘The Great Outdoors!’ plus two previously unreleased versions of ‘Now this is Fun’ (from the ‘See You’ Single 1982): a Live-version recorded in Sweden and in addition to the CDr inside above mentioned BOX-set, it also contains a new ‘The Eagle has landed’-Version of ‘Now this is Fun’, featuring the vocals of Marsheaux (while the original had James New of the Mirrors on vocals…) 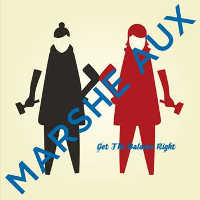